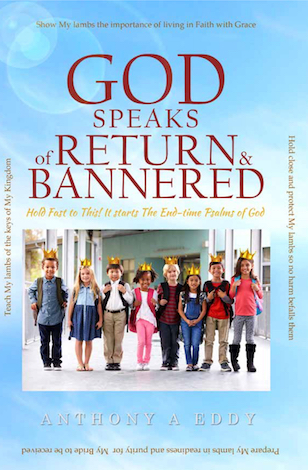 Published in New Zealand, in May 2010, is this NZ printed A5 paperback of 520 pages of which 5 are in colour. It is printed in 10pt Times New Roman font on quality paper with a high-gloss laminated cover.
The 2nd Edition released at completion on 21st December 2014 has 466 pages and '2nd Edition' appearing in blue on the cover.  This 2nd Edition only corrects  a very few 'typos' and has concentrated on completely restyling the formatting for ease of reading. No words from the divine origin have been changed, modified or replaced. They 'stand' as first received.
This cover is one of the 9 new American  6"x9" Covers coming into use in 2018 with the Launch into America as from the end of July with 418 pages
This book is a series of 176 texts in which God speaks of His return for His bride and of the impact of this event upon the peoples of the earth.
As the texts are each complete in themselves and are generally from 1 to 6 pages in length (the longest extends to 18 pages), the book may be picked up and put down whenever time allows, without the need to keep in mind the thread of an on-going storyline.
This book is a 'must read' for all who await, or doubt, The Lord's return - a matter at the very heart of every Christian's belief and faith. It will embrace and engage the most thoughtful of readers by its very intriguing style and content in that it almost completely consists of nothing but truth statements and employs an easy to read text layout probably not encountered previously by most readers.
It speaks, within seven categories - His morsels: of His good news; of His return; of His banner; of His love; of preparation; of the end of time; carried by The Cross.
The Lord Jesus, on page II of the Appendix by way of introduction and as His testimony, describes this book, which He has dictated, by saying, in part,

"This book is a tug of encouragement at man's freewill in pre-emption of the later fitting of the shackles." He concludes with, “I, The Lord, say to the peoples of the earth read My Word. I change not. From times past My Word has been preserved for all generations to this day. I, The Lord, say read My book here placed before you. Study My book for your redemption. Take into each heart this saying of The Lord while it is today, for this book is as a golden scroll.”

The first Edition also had an alphabetical indexed listing of some 3,100 text fragments and words (to be omitted in later printings) as found in the book and a dual Table of Contents lists both in order of receipt and alphabetically. There is also a section which records, in some detail, how this book, and later the other six, came into existence.

Book 8 has a full indexing (1,100 + items) in its Appendix of all the other 8 volumes in The End-time Psalms of God.
This is also together with the Cross-indexed Category Study Aid listed under 29 topics: Communication, DivCom Daniel, DivCom Revelation, DivCom Ezekiel, Edicts of The Lord, Edifice of God, Encouragement, Eternity Beckoning, Fear of God, Freewill of Man, Good News, My Banner, My Counsel, My Creation, My Garden, My Grace, My Harvest, My Kingdom on Earth, My Love, My Return, Preparation, Thanksgiving of Man, The Cross, The End-time, The Trinity, Tongues, Vision & Dream, Website of The Lord, Wisdom.

Books are readily accessed for reading from: NZ Public Libraries
and from the Library at Avarua, Rarotonga, The Cook Islands (June 2014).