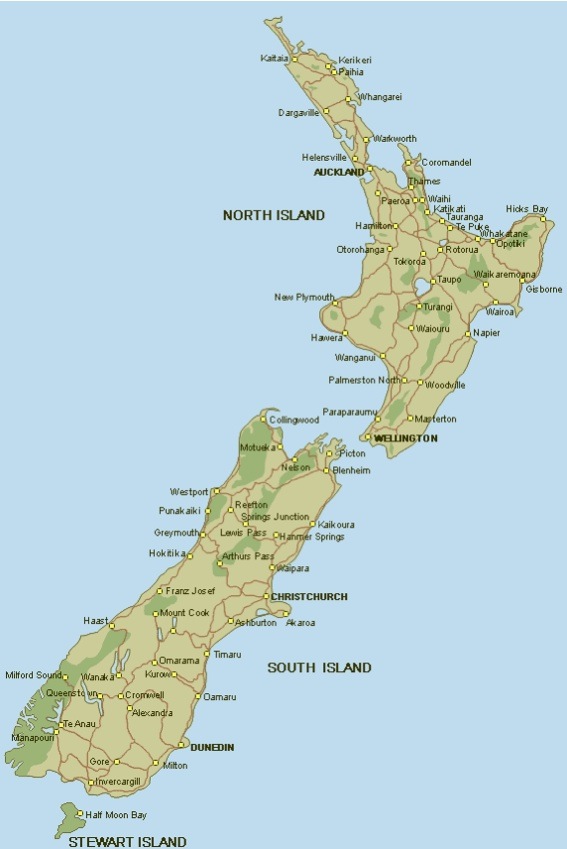 An Introduction
New Zealand (Aotearoa in Māori) is an island country in the south-western Pacific Ocean comprising two main landmasses (the North Island and the South Island) and numerous smaller islands. The country is situated some 1,500 kilometres (900 mi) east of Australia across the Tasman Sea, and roughly 1,000 kilometres (600 mi) south of the Pacific island nations of New Caledonia, Fiji, and Tonga. Due to its remoteness, it was one of the last lands to be settled by humans. During its long isolation New Zealand developed a distinctive fauna dominated by birds, many of which became extinct after the arrival of humans and introduced mammals. With a mild maritime climate, the land was mostly covered in forest. The country's varied topography and its sharp mountain peaks owe much to the uplift of land and volcanic eruptions caused by the Pacific and Indo-Australian Plates clashing underfoot.

After World War II, New Zealand joined Australia and the United States in the ANZUS security treaty, although the United States later suspended the treaty after New Zealand banned nuclear weapons. New Zealanders enjoyed one of the highest standards of living in the world in the 1950s, but the 1970s saw a deep recession, worsened by oil shocks and the United Kingdom's entry into the European Economic Community. The country underwent major economic changes during the 1980s, which transformed it from a protectionist to a liberalised free-trade economy. Markets for New Zealand's agricultural exports have diversified greatly since the 1970s, with once-dominant exports of wool being overtaken by dairy products, meat, and recently wine.

The majority of New Zealand's population is of European descent; the indigenous Māori are the largest minority, followed by Asians and non-Māori Polynesians. English, Māori and New Zealand Sign Language are the official languages, with English predominant. Much of New Zealand's culture is derived from Māori and early British settlers. Early European art was dominated by landscapes and to a lesser extent portraits of Māori. A recent resurgence of Māori culture has seen their traditional arts of carving, weaving and tattooing become more mainstream. Many artists now combine Māori and Western techniques to create unique art forms. The country's culture has also been broadened by globalisation and increased immigration from the Pacific Islands and Asia. New Zealand's diverse landscape provides many opportunities for outdoor pursuits and has provided the backdrop for a number of big budget movies.

Geography
New Zealand is made up of two main islands and a number of smaller islands, located near the centre of the water hemisphere. The main North and South Islands are separated by the Cook Strait, 22 kilometres (14 mi) wide at its narrowest point. Besides the North and South Islands, the five largest inhabited islands are Stewart Island, the Chatham Islands, Great Barrier Island (in the Hauraki Gulf), d'Urville Island (in the Marlborough Sounds) and Waiheke Island (about 22 km (14 mi) from central Auckland). The country's islands lie between latitudes 29° and 53°S, and longitudes 165° and 176°E.

New Zealand is long (over 1,600 kilometres (990 mi) along its north-north-east axis) and narrow (a maximum width of 400 kilometres (250 mi)), with approximately 15,134 km (9,404 mi) of coastline and a total land area of 268,021 square kilometres (103,483 sq mi) Due to its far-flung outlying islands and long coastline, the country has extensive marine resources. Its Exclusive Economic Zone, one of the largest in the world, covers more than 15 times its land area.

The South Island is the largest land mass of New Zealand, and is divided along its length by the Southern Alps. There are 18 peaks over 3,000 metres (9,800 ft), the highest of which is Aoraki/Mount Cook at 3,754 metres (12,316 ft). Fiordland's steep mountains and deep fiords record the extensive ice age glaciation of this south-western corner of the South Island. The North Island is less mountainous but is marked by volcanism. The highly active Taupo volcanic zone has formed a large volcanic plateau, punctuated by the North Island's highest mountain, Mount Ruapehu (2,797 metres (9,177 ft)). The plateau also hosts the country's largest lake, Lake Taupo, nestled in the caldera of one of the world's most active supervolcanoes.

Climate
New Zealand has a mild and temperate maritime climate with mean annual temperatures ranging from 10°C in the south to 16°C in the north. Historical maxima and minima are 42.4 °C (108.3 °F) in Rangiora, Canterbury and −21.6 °C (−6.9 °F) in Ophir, Otago. Conditions vary sharply across regions from extremely wet on the West Coast of the South Island to almost semi-arid in Central Otago and the Mackenzie Basin of inland Canterbury and subtropical in Northland. Of the seven largest cities, Christchurch is the driest, receiving on average only 640 millimetres (25 in) of rain per year and Auckland the wettest, receiving almost twice that amount. Auckland, Wellington and Christchurch all receive a yearly average in excess of 2,000 hours of sunshine. The southern and south-western parts of the South Island have a cooler and cloudier climate, with around 1,400–1,600 hours; the northern and north-eastern parts of the South Island are the sunniest areas of the country and receive approximately 2,400–2,500 hours.

Economy
New Zealand has a modern, prosperous and developed market economy with an estimated gross domestic product (GDP) at purchasing power parity (PPP) per capita of roughly US$28,250. The New Zealand dollar, informally known as the "Kiwi dollar", is the currency of New Zealand. It also circulates in the Cook Islands (see Cook Islands dollar), Niue, Tokelau, and the Pitcairn Islands. New Zealand was ranked the 3rd "most developed" country in 2010 according to the United Nations Development Programme's Human Development Index, 4th in the 2011 Index of Economic Freedom published by The Heritage Foundation.

In 1973 New Zealand's export market was reduced when the United Kingdom joined the European Community and other compounding factors, such as the 1973 oil and 1979 energy crisis, led to a severe economic depression. Living standards in New Zealand fell behind those of Australia and Western Europe, and by 1982 New Zealand had the lowest per-capita income of all the developed nations surveyed by the World Bank. Since 1984, successive governments engaged in major macroeconomic restructuring (known first as Rogernomics and then Ruthanasia), rapidly transforming New Zealand from a highly protectionist economy to a liberalised free-trade economy.

Unemployment peaked above 10 percent in 1991 and 1992, following the 1987 share market crash, but eventually fell a record low of 3.4 percent in 2007 (ranking fifth from twenty-seven comparable OECD nations). The global financial crisis that followed however had a major impact on New Zealand with the GDP shrinking for five consecutive quarters, the longest recession in over thirty years, and unemployment rising back to 7 percent in late 2009. New Zealand has experienced a series of "brain drains" since the 1970s that still continue today. Nearly one quarter of highly-skilled workers live overseas, most in Australia and Britain, the most from any developed nation. In recent years, however, a "brain gain" has brought in educated professionals from Europe and lesser developed countries.

Trade
New Zealand is heavily dependent on international trade, particularly in agricultural products. Exports account for a high 24 percent of its output, making New Zealand vulnerable to international commodity prices and global economic slowdowns. Its principal export industries are agriculture, horticulture, fishing, forestry and mining, which make up about half of the country's exports. Its major export partners are Australia, United States, Japan, China, and the United Kingdom. On 7 April 2008, New Zealand and China signed the New Zealand China Free Trade Agreement, the first such agreement China has signed with a developed country. The service sector is the largest sector in the economy, followed by manufacturing and construction and then farming and raw material extraction. Tourism plays a significant role in New Zealand's economy, contributing $15.0 billion to New Zealand’s total GDP and supporting 9.6 percent of the total workforce in 2010. International visitors to New Zealand increased by 3.1 percent in the year to October 2010 and are expected to increase at a rate of 2.5 percent annually up to 2015.

In the year to June 2009, dairy products accounted for 21 percent ($9.1 billion) of total merchandise exports, and the country's largest company, Fonterra, controls almost one-third of the international dairy trade. Other agricultural exports in 2009 were meat 13.2 percent, wool 6.3 percent, fruit 3.5 percent and fishing 3.3 percent. New Zealand's wine industry has followed a similar trend to dairy, the number of vineyards doubling over the same period, overtaking wool exports for the first time in 2007.

Demography
The population of New Zealand is approximately 4.4 million. New Zealand is a predominantly urban country, with 72 percent of the population living in 16 main urban areas and 53 percent living in the four largest cities of Auckland, Christchurch, Wellington, and Hamilton. New Zealand cities generally rank highly on international livability measures. For instance, in 2010 Auckland was ranked the world's 4th most livable city and Wellington the 12th by the Mercer Quality of Life Survey.

The life expectancy of a New Zealand child born in 2008 was 82.4 years for females, and 78.4 years for males. Life expectancy at birth is forecast to increase from 80 years to 85 years in 2050 and infant mortality is expected to decline. In 2050 the population is forecast to reach 5.3 million, the median age to rise from 36 years to 43 years and the percentage of people 60 years of age and older to rise from 18 percent to 29 percent.

Language
English is the predominant language in New Zealand, spoken by 98 percent of the population. New Zealand English is similar to Australian English and many speakers from the Northern Hemisphere are unable to tell the accents apart.

Christianity is the predominant religion in New Zealand. In the 2006 Census, 55.6 percent of the population identified themselves as Christians, while another 34.7 percent indicated that they had no religion (up from 29.6 percent in 2001) and around 4 percent affiliated with other religions. The main Christian denominations are Anglicanism, Roman Catholicism, Presbyterianism and Methodism. There are also significant numbers of Christians who identify themselves with Pentecostal and Baptist, and the New Zealand-based Ratana church has adherents among Māori. According to census figures, other significant minority religions include Hinduism, Buddhism, Latter-day Saints (Mormonism), and Islam.

Sports
Most of the major sporting codes played in New Zealand have English origins. Golf, netball, tennis and cricket are the four top participatory sports, soccer is the most popular among young people and rugby union attracts the most spectators.

New Zealand has competitive international teams in rugby union, netball, cricket, rugby league, and softball and has traditionally done well in triathlons, rowing, yachting and cycling. The country has performed well on a medals-to-population ratio at Olympic Games and Commonwealth Games. New Zealand is known for its extreme sports, adventure tourism and strong mountaineering tradition. Other outdoor pursuits such as cycling, fishing, swimming, running, tramping, canoeing, hunting, snowsports and surfing are also popular.

This content is reproduced from
WIKIPEDIA The Free Encyclopedia